Pav Bhaji is one fast food that almost everyone loves. Indian... Read more

Pav Bhaji is one fast food that almost everyone loves. Indian Pav Bhaji is famous for its North Indian touch that adds spice and flavor to taste. With Indian Pav Bhaji Masala, we have tried to bring back that savory touch of Mumbai street food while maintaining all the nutritional values of Black Cardamom, Clove, Cinnamon, Black Pepper, Turmeric, Jeera, and others remain intact.

We are using the following ingredients to make sure that you will get authenticated taste of Indian food when you make pav-bhaji at your home:

Why use Indian Pav-Bhaji Masala?

Satvic Foods' Indian Pav-Bhaji Masala is not intended to diagnose, treat or cure any disease. It is recommended to consult with your doctor or nutritionist before consuming any homemade masala powders. Prepared under the same unit that processed nuts.

I used Delhi Pav Bhaji Masala and made bhaji. It tasted so yummy and satisfied my craving of having the best pav bhaji ever❤. 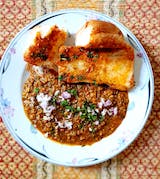 Q. Is it safe to take homemade products?

Q. Why Satvic Foods is different than other brands?

Q. Can my diabetic parents consume products from Satvic Foods?